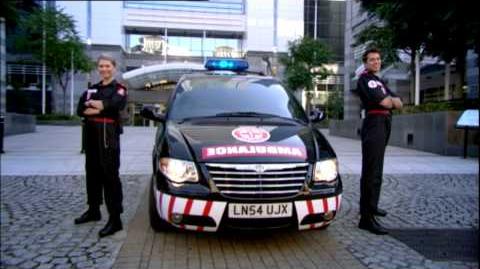 The New Emergency Services is a popular IT Crowd joke among fans of the series and appeared in the episode Calamity Jen. The joke is that while the emergency services have been updated mostly for the better, they've also changed their phone number from the easily-remembered UK 999 to the slightly less easy-to-remember 0118, 999, 881, 999, 119, 725....3.

Announcer: Has this ever happened to you?

(Shows an old lady falling down from the top of the stair, getting up and then falling down another flight of stairs to the ground floor.)

(Shows that Moss sat there watching the advert)

In the Season 3 episode From Hell, Douglas asks Moss to call 999 for him, but Moss informs him that there is a new number and begins to sing the number. If you have an Android phone and type the number in the dialler, the call button will flash blue and red.

Community content is available under CC-BY-SA unless otherwise noted.
Advertisement